October 2, 2020 / Susie Touchinsky / Comments Off on ACL (Allen Cognitive Lacing) for the Win! 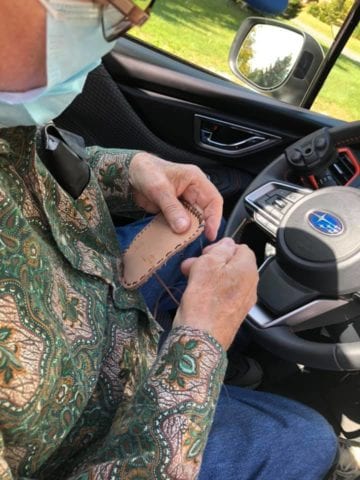 And the Allen Cognitive Test (ACL) comes to the rescue again for a win!!

Hello OT friends! I used the ACL (Allen Cognitive Lacing Test) to understand my client’s readiness to drive again! It is really a great tool. This time my client, had no more than an eighth-grade education and grew up as a farmer.

He leads a very simple life, and the doctor was concerned about his cognition and caregiver burnout. He is caring for his wife with moderate dementia.

The doctor noticed that she had to repeat information more than once, and was concerned about his fatigue and his own cognition. He scored 15/30 on the SLUMS.

He was seen by his local OT therapist who evaluated him and noted difficulty on paper and pencil cognitive testing (22/30 on the MoCA) and difficulty on the driving simulator with poor pedal regulation, slow brake reaction time, & multiple crashes. This OT still believed in him and recommended a behind-the-wheel evaluation with me.

When I met him yesterday, I immediately thought of my husband‘s grandfather, Pappy.

Pappy, also had no more than an 8th-grade education and at times would ask us to repeat ourselves when he missed the information, either because of some hearing loss or because we were talking just too damn fast.

Yesterday, I met my client in his home. When I arrived he was sitting next to his wife, sweetly talking to her. He had arranged for his adult daughter to be present so that his wife would not be left alone when we were in the car. He was well organized, with my intake documentation already completed, a complete list of his medications, and he had his license and checkbook ready for me. He was waiting for me to determine who to write the check to. As I watched him write the check, he carefully made a note in his balance book and correctly completed the calculations.

He then offered me a cup of tea, which I politely declined. He mentioned he was just about to make one for his wife and asked if I mind while he brewed a pot of tea.  I told him to go for it and quietly watched as he easily navigated his kitchen, safely use the gas stove, carefully warmed the pot with water before brewing her tea, and prepared a tray with a teacup, saucer, sugar cubes, and creamer. It was a simple task, and one that he’s done multiple times a day, but it gave me a chance to watch his motor and process skills and gave me confidence in him.

When we got down to the assessment, he fully disclosed to me that he remembered completing the OT evaluation and having some trouble.

He said, “you know I’ve never done well in school, and I’ve never used a computer.” He still remembers having trouble with the simulation scenarios and was a little upset about it.

I told him to take a deep breath, and then we are going to work through a couple of different activities so that I could understand him. He had already shown me the completion of two different IADL tasks successfully, the teapot and the checkbook writing, so he walked me through his medications, of which he knew every single one and the reason he was taking them, and then  next I had him complete the brake reaction timer.

It has always been my practice, to give my clients time to warm up on this piece of equipment and to talk to them about the goal. After I answered his couple of questions, his time really improved. He moves from about one second reaction time to half a second. He then consistently completed a dozen trials with consistent, safe brake reaction. A significant difference from his simulator performance.

Finally, before we left, while we were sitting in the quiet car, (there were a few distractions in the home), I took him through the Allen cognitive lacing test.

. This score is supportive of the cognitive skills needed for driving.

We then spent the next 75 minutes driving from his rural country setting, into town, and downtown Allentown. He managed a variety of challenging driving maneuvers, responded to aggressive drivers appropriately, demonstrated fast reaction and noticed a response speed, scanned his mirrors, and overall had a strong pattern of defensive driving skills.

ACL was key for me gaining confidence in taking him out on the road.

What’s in your own toolbox?
Interested to learn more about cognition and driving? We’ve got you covered!
https://adaptivemobility.thinkific.com/…/cognition-driving